‘These are poems that hold words to the light until they catch it and flash with sudden truth.’ Andrew McCulloch, Times Literary Supplement.

‘Filled with invention, exceptional skill and rueful humour ‘ Peter Carpenter, Under The Radar.

‘Such writing is highly imaginative and something of a high wire act…this is a vivid collection’ Warwick Review.

‘A lyricism that is quite his own.’ David Cooke, The North

‘ Every other line offers something in language we can revel in, smile at, whisper in pleasure as we read. Some lines feel like sonic ball-pools we can roll around in, emerging for air only as they resolve.’ Noel Williams,  The North

” There’s a kind of spirituality at work in poems which reference such things as the unexpected sight of a heron on an inland housing estate and in the title poem.’ Michael Brown.

You can buy ‘The Great Animator’ from Shoestring Press, 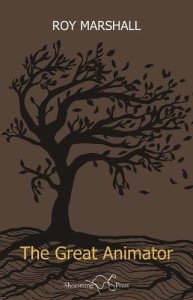 A selection of versions of poems by the great Italian poet, Eugenio Montale.

From a review by Carla Scarano in ‘The High Window.’

‘ Skilful translations that capture the main concepts and feelings of the original…
the choice of language and the selection of poems both contribute to make After Montale an excellent introduction to the poet’s major themes…there is a good balance between fidelity and licence in these translations: they are faithful to the original but also depart from them at times….a translation needs to be transparent – it should not obscure the original, which should filter through it. This is what Roy Marshall’s work does, making Montale’s poetry effective in its genuine signification and expressing, at the same time, his own voice in a poetical English version…  There is a profound sense of keeping in touch with the essence of Montale’s poetry and giving the reader the opportunity to appreciate the poet’s work.  The effect is unique and successful in its own right.’

From a review in London Grip, by Caroline Maldonaldo

‘The translation and the selection and organisation of these poems (not chronological) are also an expression of Marshall, the poet. They are a delight to read, beautifully crafted, spare yet lyrical….. With this pamphlet he has brought us his version of Montale, a selection of poems that work beautifully in their own right. ‘

£8.50  (includes postage and packing) via pay pal button below.