My new Shoestring Press book, ‘After Montale’ has arrived and is available here. 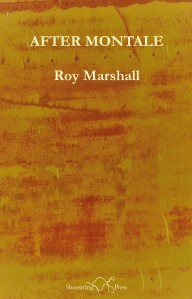 Since publication of the book I have been asked a few questions by people interested in my translation process. The book contains a brief introduction summarising some of my intentions, but I wanted to examine and share further thoughts here and so have gathered quotations from writers on the theme of translation.

I have chosen these specifically in order to articulate aspects of my own experience of translating the poems of Eugenio Montale and have added some responses.

“You choose your philosophy of translation just as you choose how to live: the free adaptation that sacrifices detail to meaning, the strict crib that sacrifices meaning to exactitude. The poet moves from life to language, the translator moves from language to life; both like the immigrant, try to identify the invisible, what’s between the lines, the mysterious implications.” ― Anne Michaels, Fugitive Pieces

My own approach has been (in most instances) to try and strike a balance, to develop a hybrid somewhere between ‘free’ adaptation and ‘the strict crib’.   In the introduction to the book I describe this as an attempt to ‘achieve a balance between fidelity to the essence of the original and fidelity to my own voice.’

“The word ‘translation’ comes, etymologically, from the Latin for ‘bearing across’. It is normally supposed that something always gets lost in translation; I cling, obstinately to the notion that something can also be gained.” ― Salman Rushdie, Imaginary Homelands: Essays and Criticism 1981-1991

Unsurprisingly,  I like the idea of something being gained in the act of translation and reading translation very much. It is a counterbalance to the idea of loss that is often (Rushdie says ‘normally’ ) regarded as the main experience or outcome of literary translation.

When it comes to the idea of loss, it is perhaps useful to learn and accept the inevitability of this.  Benjamin Jowett writes, “All translation is a compromise – the effort to be literal and the effort to be idiomatic.”

This, from Noam Chomsky, neatly summarises the feeling of sometimes feeling almost overwelled by the possibilities presented by language when approaching translation.

“Language is a process of free creation; its laws and principles are fixed, but the manner in which the principles of generation are used is free and infinitely varied.” — Noam Chomsky

The idea that ‘art is never finished, only abandoned’  was brought home during the work since the choices and variations available made it difficult to settle on a final print version.

“There can never be an absolutely final translation.” — Robert M. Grant

I found that translation (even of relatively short pieces such as the ones I included in the book) is extremely absorbing and time consuming. It is hard work. Bijay Kumar Das writes

‘A translator is a reader, an interpreter and a creator all in one.”

Samuel Putnam concludes that
“In translation language facility is not enough; blood and sweat are the secret.”

“To translate, one must have a style of his own, for otherwise the translation will have no rhythm or nuance, which come from the process of artistically thinking through and molding the sentences; they cannot be reconstituted by piecemeal imitation. The problem of translation is to retreat to a simpler tenor of one’s own style and creatively adjust this to one’s author.” — Paul Goodman

“The language of translation ought never to attract attention to itself.” — John Hookham Frere

I am attracted to this idea and perhaps unconsciously simplified my own style in order to adjust to my author, Montale. Obviously, there will be translators who take different approaches; who ‘turn up’ their own voice in versions that use the original as a stepping off point, perhaps, for their own improvisation on the poem. An example would be Robert Lowell’s versions of Montale (see Paul Muldoon’s fascinating essay on this in his book ‘The End of the Poem’.)

I found it impossible not to add or take away anything from the poems I worked on. Accepting this truth was liberating and freed me from a sense of betrayal that I sometimes felt when working on the poems- a sense that I had in some way betrayed an aspect of the original work. Speaking of betrayal, there is some solace in this idea

“Fidelity to meaning alone in translation is a kind of betrayal.” — Paul Valéry

“The translation called ‘good’ has original value as a work of art.” — Benedetto Croce

If this next quote from Günter Grass isn’t a description of translation as a magical, mysterious act, I’m not sure what is.
“Translation is that which transforms everything so that nothing changes”

“Translation is entirely mysterious. Increasingly I have felt that the art of writing is itself translating, or more like translating than it is like anything else. What is the other text, the original? I have no answer. I suppose it is the source, the deep sea where ideas swim, and one catches them in nets of words and swings them shining into the boat.”

‘Every act of communication is a miracle of translation.” ― Ken Liu, The Paper Menagerie and Other Stories

Iris Murdoch’s words are refreshing. Why translate? Her answer is, for pleasure. How liberating to hear ‘someone else’s voice’ coming from your own mouth!

On a larger scale, a rational for translation is provided by Calvino

“Without translation, I would be limited to the borders of my own country. The translator is my most important ally. He introduces me to the world.” — Italo Calvino

There is the philosophical position suggests that every artwork is a form of translation. Translation from one language to another is simply (or rather complicatedly) another branch of the same process.

‘ There exists a chance of every poem getting changed while reaching every reader. This ‘getting changed’ is a form of ‘getting translated’, in a way. So, every assimilation of any poem is a translation.” ― Suman Pokhrel

‘A translation can be faithful to tone and intention, to meaning. It can rarely be faithful to words or syntax, for these are peculiar to specific languages and are not transferable.”