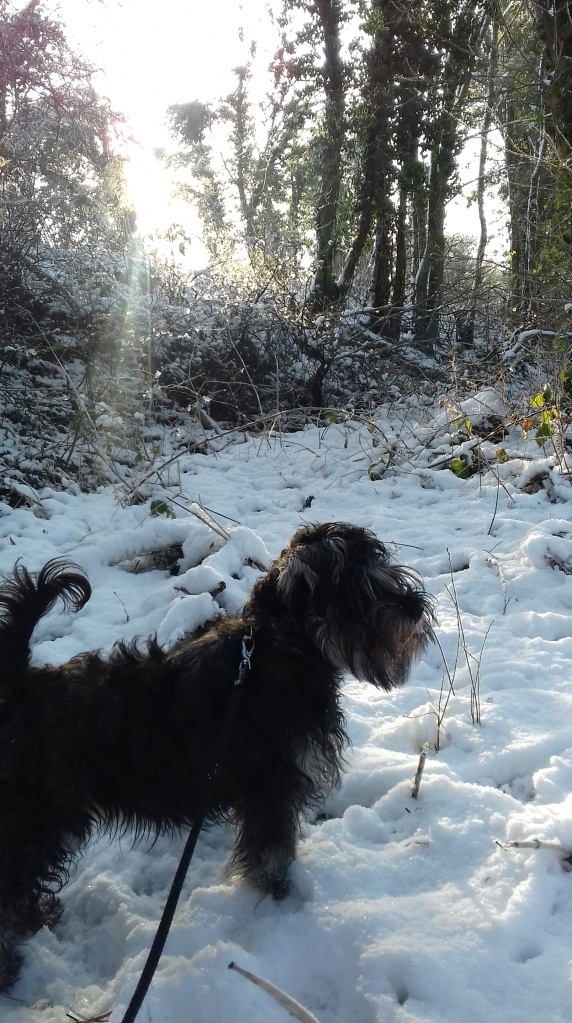 Spontaneously looking for winter poems yesterday, I seem to have gathered a small anthology. This is the 3rd selection to be posted, and probably the last for this year as I have work to do.

The first poem is by the brilliant Fleur Adcock, and is a typical example of her poised, ironic style. The easy conversational tone understates her wit and keen  social and psychological insights.

Literally thin-skinned, I suppose, my face
catches the wind off the snow-line and flushes
with a flush that will never wholly settle. Well:
that was a metropolitan vanity,
wanting to look young for ever, to pass.

I was never a Pre-Raphaelite beauty,
nor anything but pretty enough to satisfy
men who need to be seen with passable women.
But now that I am in love with a place
which doesn’t care how I look, or if I’m happy

happy is how I look, and that’s all.
My hair will turn grey in any case,
my nails chip and flake, my waist thicken,
and the years work all their usual changes.
If my face is to be weather-beaten as well

that’s little enough lost, a fair bargin
for a year among lakes and fells, when simply
to look out of window at the high pass
makes me indifferent to mirrors and to what
my soul may wear over its new complexion.

Here is a poem from Sinead Morrissey’s ‘Parallax’. Sinead once lent forward in her seat
to quietly let me know she enjoyed the poem I had just read. This sort of complement helps poets.

was not like last winter, we said, when winter
had ground its iron teeth in earnest: Belfast
colder than Moscow and a total lunar eclipse
hanging its Chinese lantern over the solstice.
Last winter we wore jackets into November
and lost our gloves, geraniums persisted,
our new pot-bellied stove sat unlit night
after night and inside our lungs and throats,
embedded in our cells, viruses churned out
relaxed, unkillable replicas of themselves
in the friendlier temperatures. Our son
went under. We’d lie awake, not touching,
and listen to him cough. He couldn’t walk
for weakness in the morning. Thoracic,
the passages and hallways in our house
got stopped with what we would not say –
how, on our wedding day, we’d all-at-once
felt shy to be alone together, back
from the cacophony in my tiny, quiet flat
and surrounded by flowers.

I sometimes have trouble formatting poems on these electronic pages. If I could work out how to typeset a poem
that doesn’t have a regular left-hand margin I would share a winter poem by Philip Gross. It is called ‘A walk across a field’
and is from his collection ‘Love songs of carbon’. The poem has some lovely rich andd concise  description- ‘No time or surface is quite level./ Once-clear pools/ grow dim- eyed and tense; /  they too thicken and bulge/ to threatening opacities,/ who knows/ how brittle.’

I’m a fan of the American poet CK Williams who almost never stuck to regular left-hand margin aligned poems. In order to get around the margin problem I’ve taken a picture of Williams  Snow II 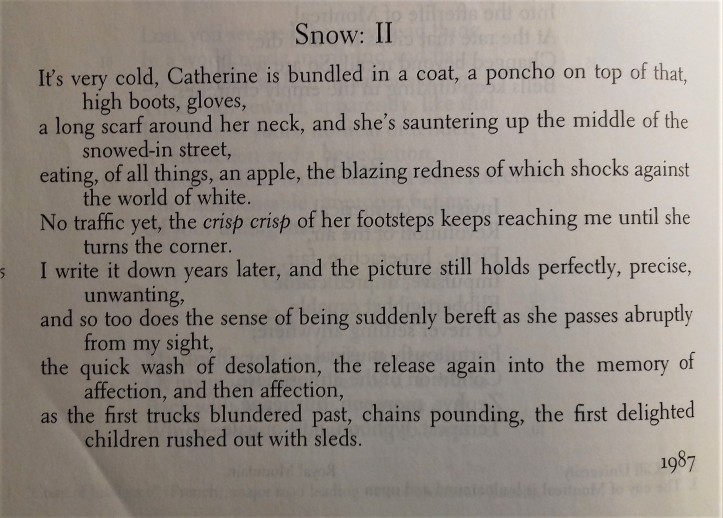 The poem above is from 1987 and taken from New and Selected from Bloodaxe.
Despite x-box and PlayStation, the children do still play out.

The snow is melting by Kobayashi Issa

The snow is melting
and the village is flooded
with children.

This morning those children not at home were making their way to the re-opened local school.
These are the last eight lines of John Clare’s ‘Schoolboys in Winter.’

– and on each shallow lake
Making glib slides where they like shadows go
Till some fresh pastimes in their minds awake
And off they start anew and hasty blow
Their numbed and clumpsing fingers till they glow,
Then raceswith their shadows wildly run
That stride, huge giants, o’er the shinning snow
In the pale splendour of the winter sun.

On a recent walk I also took a picture of a gull flying in falling snow. It came out a bit like this 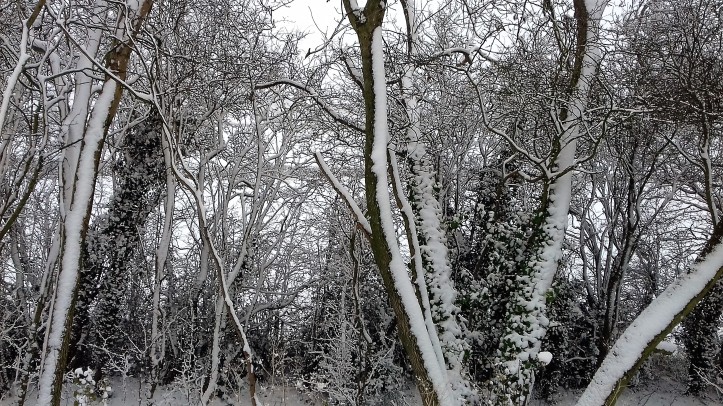 I’d go with Dad to the woods, collect fallen
branches, the large ones at a slant
from his shoulder to mine, our hands
limed or browned by bark.

Across an up-turned tea-chest and held
by hand and boot, he’d saw through,
the pitch of blade-song dropping
as he reached the far side.

Older, I learnt the languages of wood; dense oak
coughing fine dust, the blade
stuttering in the cut, asking more
from an aching arm, a racing heart and lungs;

soft hawthorn, torn by long strokes, its give
urging me on; but my favourite was pine for its scent,
first when cut, again when burnt, the spittle-hiss
and crack as perfume stole the room.

It’s years since the gas fire was installed,
but on the garage wall hangs the bow saw,
handle faded, blade scabbed with rust
and blunt from use.

I take it down and I’m back
in the woods, winter dusk falling,
our breath streaming out as we trudge to the car,
a branch span between us.

The Australian Maestro Les Murray has written a couple of wintery poems.
You can read his ‘Once in a Lifetime Snow’ at the Australian poetry Library here.
Although more of a spring poem and so not really eligible for this mini- winter anthology,
Murray’s ‘Late Snow in Edinburgh’ is also  in the library, and is full of wonderful free flowing lines
and his trademark inventive imagery.

A lamb-killing wind out of Ayr
heaped a cloud up on towering Edinburgh
in the night, and left it adhering
to parks and leafing trees in the morning,
a cloud decaying on the upper city,
on the stepped medieval skyscrapers there,
cassata broadcast on the lower city
to be a hiss on buzzing cobblestones
under soaped cars, and cars still shaving

Christmas carols contain some great lines of winter poetry; ‘deep and crisp and even’.
Sadly, as I write this, the streets of Bethlehem are once more misted with teargas.

I’ve only just discovered that the carol ‘In the Bleak Midwinter’ that I used to sing with great gusto as a child (I really meant it) was originally a poem by Christina Rossetti. It was first published as ‘A Christmas Carol’ in the January 1872 copy of Scribner’s Monthly. Here are the opening lines.

I loved, and still love, the repetition of‘snow’. I loved the vowel sounds in ‘snow’ ‘moan’, ‘stone’, ‘ago’. The middle is perhaps overlong, particularly if the poem is being sung in a pew in a church where you can see your own breath. Belting out the ending might keep the singer warm. 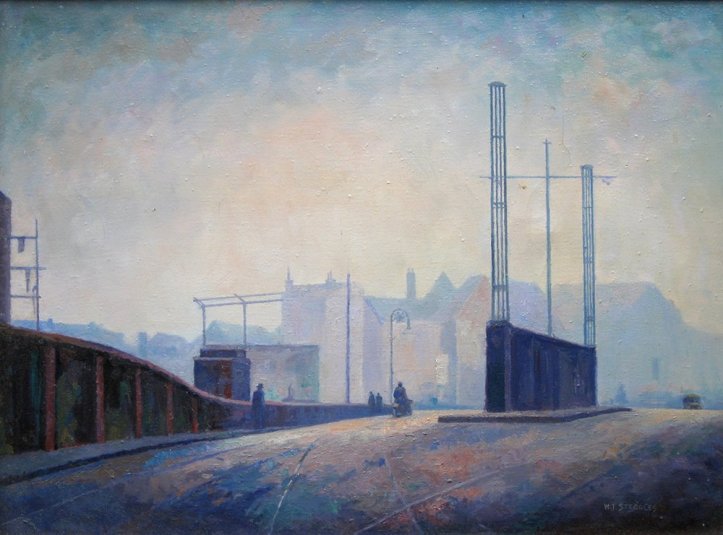 Here are some icy lines from ‘The Seafarer’, a poem that appears in the Exeter Book, a tenth-century manuscript collection of Old English poetry, translated here by Richard Hamer.

He knows not, Who lives most easily on land, how I
have spent my winter on the ice-cold sea,
Wretched and anxious, in the paths of exile,
Lacking dear friends, hung round by icicles,
While hail flew past in showers. There I heard nothing
But the resounding sea, the ice-cold waves.
Sometimes I made the song of the wild swan
My pleasure, or the gannet’s call, the cries
Of curlews for the missing mirth of men,
The singing gull instead of mead in hall.
Storms beat the rocky cliffs, and icy-winged
The tern replied, the horn-beaked eagle shrieked.

I heartily recommend, when and if you can find time, getting lost in this bleak tale. This version is in The Norton Anthology of Poetry.

Back to the 21st century and here is a poem by Mel Pryor, from her 2014 Eyewear pamphlet ‘Drawn on Water’. I asked Mel’s permission to share this lovely poem.

Hoof-pools brim, the berry hedgerows
unload the notes of birds whose names
I can’t recall, and here’s a ditch
that winter’s shifted into river
thieving the sky, the frantic clouds,
the reflection of an alder tree
like a single cerebellum nerve cell.
It’s clear these days I’ve been too much
inside, though the mind is a changing thing,
can change like alder drawn on water.

Finally, here’s a last winter poem from me. This one appears in my new book,
‘The Great Animator’.

I’d go there too, if all I’d known
was warped or riven,
to a place of un-diluted light
where the wind comes naked
after its flight over the sea.
I could work, building hatches
to batten, break firewood open
on the blade of an axe, slap up
gull-splattered stone
in a new coat of white.
I’d throw grain for the all-important chickens,
majestic in their suits of henna and rust,
their feet lifted high and placed
so carefully, as if the grass
might hurt. I understand that
the language of rain is common,
and that snow is often spoken,
particularly at night. I’d like to wake
to the silence of still waves,
white horses hitched and rock tethered
under a sky of ice.