Reading Helen Mort’s fascinating piece on the male and female gaze in poetry this afternoon and the distinctions between the approaches of two male poets, I was reminded of my own ‘male gaze’ poem which appears in the new book The Great Animator.

The John Burnside poem Helen quotes is not dissimilar to my own; the narrator is an older man (in Burnside’s case sixty) looking at a young woman.

Reading my poem again I was briefly uneasy about my use of the word ‘girl’ for a young woman, but then I’m fairly sure I’d consider and refer to a teenage male as a ‘boy’.  I suppose my own poem features the male gaze twice, since a comparison is made between the young woman and the ‘qualities’ conveyed in portraits by Da Vinci painting, another instance of the male gaze. In his paintings Da Vinci tended to depict women as ‘fully rounded human beings’ as this article suggests.

I remember looking at several Leonardo Da Vinci paintings after I decided to make the comparison between the young woman in the train carriage and a Leonardo painting.

I wanted to check this what I really meant,wanted to look at the paintings and rediscover what the nature of their ‘beauty’ seemed to be based upon. 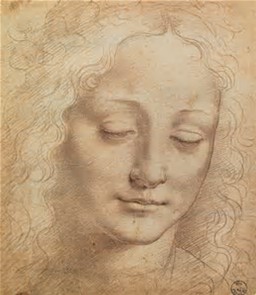 I decided that serenity and assurance were the two main qualities that seemed to emanate from the work, and that these were the words I was looking for, or perhaps more accurately, these words were looking for the poem.

Heading north again, yellow and orange leaves stream past
like dots freed from a Seurat painting.

We pass a plump brown river, the promise of another flood
held under its skin.

A horse in a green coat
rolls in a field; a wash of mist

softens a ridge. Outside Chesterfield
I try to look away from a girl

the tunnel-blacked window.
She glances up

and through me, serene and assured
as a Leonardo.

From ‘The Great Animator’