I first met Mark Pajak last year in Manchester. It was a splendid day for me since I had the great pleasure of reading in the John Rylands library with the wonderful Liz Berry. I bumped into him again at the launch of my friend James Giddings pamphlet in Sheffield. Mark mentioned that he had been invited to read in Leicester, and although I was unable to attend the reading I was able to meet him for a brief chat and a coffee.  He had copies of his newly published pamphlet with him and I duly purchased a copy.

I read through it in one go. The abundance of vivid and inventive imagery makes the collection compelling and many of the pieces are instantly memorable. There are poems which deal with childhood and adolescence but manage to skirt nostalgia. Narratives are coloured with startling word choices. The work is precise, controlled and measured , unfolding carefully and without hurry.  It is economic without being sparse or losing its internal music. While many of the poems deal clinically and chillingly with themes of violence and tragedy, the work never feels emotionally ‘cold’. Other poems confront illness and loss in a way that is moving without being overtly sentimental. And while there are echoes of Heaney, Hughes, and Farley, particularly in thematic concerns such as the interaction between the be spoiled urban environment and its ‘nature’, Mark has a distinctive and unified style of his own. I particularly liked the three poems below and asked Mark if I could them. He kindly agreed. 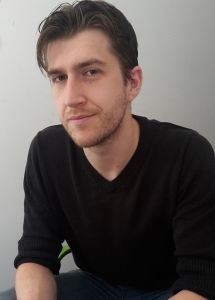 Mark Pajak was born in Merseyside. His work has been published in Magma, The North and The Rialto among others, been highly commended the Cheltenham Poetry Competition and National Poetry Competition and won first place in the Bridport Prize. He has received a substantial Northern Writer’s Award from New Writing North and was 2016’s Apprentice Poet in Residence at Ilkley Literature Festival. His first pamphlet, Spitting Distance, was selected as a Laureate’s Choice and is published with smith doorstop.

Believe in the dream… Beware the danger
– Marie-Nicole Ryan

from icy rivers. And though this is only Bootle,
Liverpool, and rats wicker in the reeds,

a mallard rasps and a condom eels by
on the current, she thinks herself Inuit

in this northern wind that shivers the water
as a magnet will skitter iron shavings.

So she dips her small hands, motions
as if beckoning and waits for the trout.

But there are no trout. Instead, in the sunk
smoke of algae, sticklebacks scatter

like a shoal of razors. Under the drowned
hull of a bathtub, a pike as long as her arm

slys its snout upwards. The rusty ring
of its gullet ready to slip on a finger.

Brood
… and in their glance was permanence
– John Berger

At sixteen, I did a day’s work
on an egg farm.
A tin shed the size of a hanger.

Inside its oven dark
two thousand stacked cages,
engines of clatter and squawk.

My job, to pass a torch
through the bars for the dead hens
and pack them tight into a bin bag.

All the time my mind chanting:
there’s only one hen. Just one
ruined hen repeated over and over.

In this way I soothed the sight
of all that caged battery,
their feathers stripped to stems,

their patches of scrotum skin,
their bodies held
in the dead hands of their wings.

But what kept me awake
that hot night in my box room,
as I listened to the brook outside

chew on its stones and the fox’s
human scream, was how
those thousand-thousand birds

had watched me. And really
it was me repeated over and over,
set in the amber of their eyes.

Me, the frightened boy in jeans
stiff with chicken shit, carrying
a bin bag full of small movement.

A foot that opened. An eyelid
that unshelled its blind nut.
A beak mouthing a word.

Dad, you had shared with me your sleeping bag.
And we lay like hands held in one pocket.
When the dark flickered and a pause before

thunder; a sound like the sky waking.
And waking with it, I trembled, trapped,
a boy in a storm, in this tight space

ripe with your sleeping man’s body.
But when the canvas flared again
white with a hem of shadow grass,

you were awake and counting
down the seconds to thunder.
And I, listening, was struck still.

As each count became less
-the storm brighter, louder-
I could feel a closeness

like breath in the air.
And I fell asleep
as rain would fall; soft,

then in a rush.
You counting us
into the eye.