A visit to the West Riding

A few days ago I had the great pleasure of giving a poetry reading in Hebden Bridge, West Yorkshire.

It is about nine years since I first read a poem in public- one commissioned by my friend Pete for the naming ceremony of his twins.  I don’t think I was entirely audible on that occasion, and like to think that experience gleaned in the intervening years has improved my listener’s experience.

Although any public performance invariably involves a quickening of the pulse, I  feel I have relaxed into reading my work, and can now share my poems as I would wish- confidently, clearly, at the right pace, and unimpaired by the shaking hand, racing heart and dry mouth that can beset the novice (and sometimes) the more experienced reader.

Winston Plowes, who runs the Poetry Shindig, is an excellent host, and the audience were attentive and wonderfully appreciative. There were certain other vital elements in place including a very good microphone and a little reading light on a bendy stalk-  in short everything one could wish for. All this and a chance to meet up with poetry mates Keith Hutson and John Foggin, the latter the subject of my last post.

Arriving earlier in the day  I had time to walk to Heptonstall along
the steepening path that leads up the side of the valley. 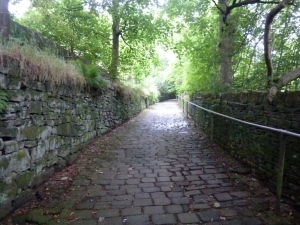 It was raining and quite dark under the trees. At one point I passed a birch that had pushed down the high grit-stone wall, its roots refusing to be contained. 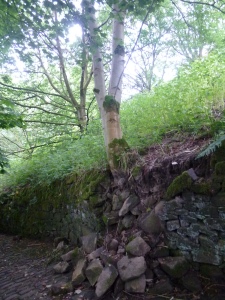 I’m sure you will know that  Ted Hughes lived in the neighbouring village of Mytholmroyd until his family moved to Mexbrough when he was seven, and that Sylvia Plath is buried in the churchyard at Heptonstall.

and Hughes ‘Birthday Letters’ (Faber, 1998) contains the poem ‘Stubbing Wharfe’ in which he describes, in less than flattering terms the pub in Hebden Bridge where he and Sylvia sat in ‘the gummy dark bar’ one winter night in the late nineteen fifties.  As John Foggin confirmed later that evening in the comfort of Nelsons Bar, Hebden Bridge was a far darker place back then.
In Hughes poem ‘The black humped bridge and its cobbles’ are ‘sweating black, under lamps of drizzling yellow’, and despite his obvious dislike and discomfort at being back inside the ‘shut-in/ Sodden dreariness of the whole valley’ he attempts to convince both Sylvia (and perhaps himself) that they might make a home here

‘ ‘These side-valleys,’ I whispered.
‘Are full of the most fantastic houses,
Elizabethan, marvellous, little kingdoms,
Going for next to nothing.’ 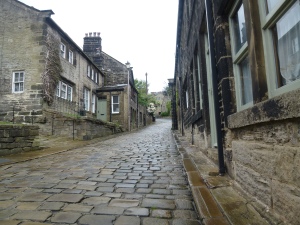 Heptonstall has two churches. The earlier abandoned and ruined one is shown here.

I wondered around the churchyard and found Sylvia Plath’s grave.
On that day, maybe because of the inclement weather,  there was no-one else there, and the grave, like most of those surrounding, was tidy and without anything unusual to distinguish it. I have heard that the name ‘Hughes’ has been removed several times over the years by those who vilified the poet in the aftermath of Plath’s suicide (although this has not happened for a long while,) and that people will often leave tokens on the grave. I was glad I was alone and pleased to see that the grave bore nothing more than some well placed small plants and a single healthy pink rose, beaded with rain.