Living, as I do, near the centre of England (draw two axis lines through a map of the country and I’ll be sitting writing this where the two lines intersect) allows me to roam to the north, east, south and west, work and life commitments permitting, with relative ease.  Our house is a hundred miles from London and a hundred miles from Leeds.

It has occurred to me that I should try and get myself booked for more readings.  In an effort to get out more (I really should) I’ve approached one or two people who run spoken word events, including Staffordshire poet laureate Gary Longden, who runs Poetry Alight in Lichfield where I’m pleased to say I’ll be next Tuesday evening.

I decided to be more proactive in asking to read, since,  although I’m fortunate enough to have received requests for poems from magazine editors recently, I have seldom been invited and could probably sit here in the middle of England waiting forever to be asked.

Notable exceptions have included invitations to support Pete and Ann Sansom at Word! In Leicester in 2014, and to read at the Midsummer poetry festival in Sheffield with A.B Jackson and Nia Davies last year.

My two favourite invitations have come from Poets and Players at the fabulous John Ryland’s Library in Manchester, where I read a few weeks ago, and from Keith Hutson, editor, with Rebecca Bird, of online magazine Hinterland.

Keith, who runs Wordplay at the Square Chapel in Halifax, is a modest and kind man as well as a superb poet (I’ll be featuring three of his poems here next week, one of which is in the current issue of The Rialto) and his invitation included the option of staying at his smallholding near Halifax, which I gladly accepted.

Keith’s cottage nestles near the top of the valley, the fields on both sides and above and below slanting at forty degree angles. Keith and his partner Fiona keep a flock of sheep whose sole purpose is to keep the grass short on the steep slopes. Behind the cottage, past the odd Millstone grit boulder, Keith has planted fruit trees, whose fruit, when in season, the lucky sheep pluck and munch straight from the branch.

I took the opportunity of stopping at Yorkshire Sculpture Park on the way up to Halifax. There is too much to say about this wonderful (free to visit) park here, but if you haven’t been, do go. The highlight for me was this Henry Moore. Here is one of a series of photographs I took, but I think that the emotional and/or spiritual impact of this sculpture set in the landscape can only be experienced by visiting. 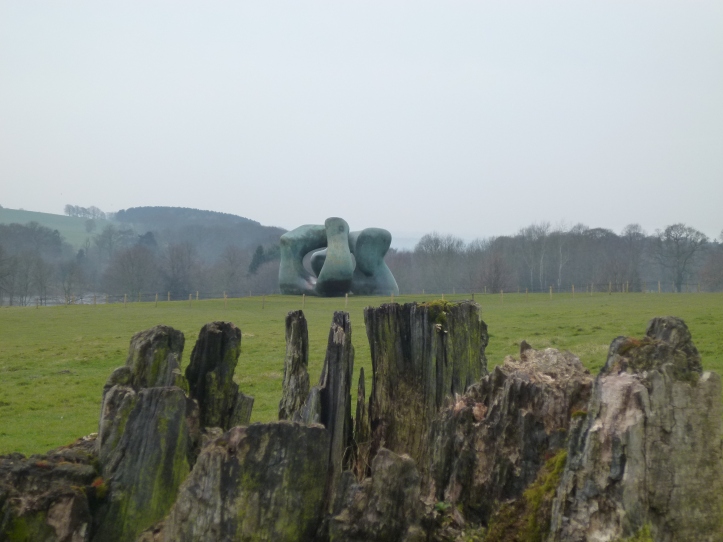 The Square Chapel is a beautiful Grade II listed Georgian Chapel, the oldest of its kind in the country having been built in 1772. It was saved from demolition in 1918 by a small group of volunteers (I can only imagine some planners where intent on sweeping away the old in order to build something more ‘modern’ at the time) and is in the process of renovation and development which will include an extension linking it to the magnificent Piece Hall. 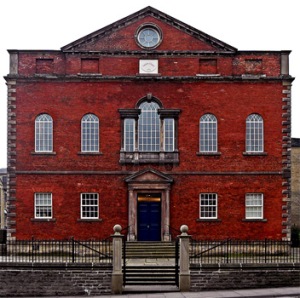 Keith’s other guest poets included James Caruth, winner of the Poetry Business completion, and Lucy Burnett who’s Leaf Graffiti was published by Carcanet in 2013 who both read brilliantly.

The audience was friendly and attentive, the open mike included a cracking Yorkshire dialect poem from Andy Smith, and it was good to have a chat with everyone and to be given a short tour of the chapel. I also received a pint of locally brewed stout on the house! It was a great pleasure to see John Foggin, wearer of fine waistcoats and leather jackets, who I met some years ago in Sheffield, and to hear him read a very moving and beautifully made poem about cutting his father in law’s hair. 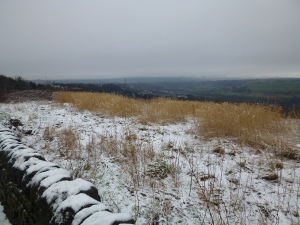 I awoke the next morning to the falling snow, (not an unusual site in this part of the world in March but a treat for me,) and after borrowing a pair of wellies and going out with Keith to feed the flock, headed back, sad to be leaving the north, but pleased, once more, to be close enough to spend time with some warm, generous and welcoming people and to briefly experience some of its geographical, historical and cultural riches.